Both kinds of music (71): Ridin' the outlaw trail

Both kinds of music (70): Back to the Nitty Gritty

Roderick Long wundert sich über  Palins neuen "linkslibertären" Töne in der New York Times, die geradezu aus einem Artikel von Kevin Carson stammen könnten. Hier ein länger Auszug:
"She made three interlocking points. First, that the United States is now governed by a 'permanent political class', drawn from both parties, that is increasingly cut off from the concerns of regular people. Second, that these Republicans and Democrats have allied with big business to mutual advantage to create what she called 'corporate crony capitalism'. Third, that the real political divide in the United States may no longer be between friends and foes of Big Government, but between friends and foes of vast, remote, unaccountable institutions (both public and private).
In supporting her first point, about the permanent political class, she attacked both parties’ tendency to talk of spending cuts while spending more and more; to stoke public anxiety about a credit downgrade, but take a vacation anyway; to arrive in Washington of modest means and then somehow ride the gravy train to fabulous wealth. She observed that 7 of the 10 wealthiest counties in the United States happen to be suburbs of the nation’s capital.
Her second point, about money in politics, helped to explain the first. The permanent class stays in power because it positions itself between two deep troughs: the money spent by the government and the money spent by big companies to secure decisions from government that help them make more money.
'Do you want to know why nothing ever really gets done?' she said, referring to politicians. 'It’s because there’s nothing in it for them. They’ve got a lot of mouths to feed — a lot of corporate lobbyists and a lot of special interests that are counting on them to keep the good times and the money rolling along'.
Because her party has agitated for the wholesale deregulation of money in politics and the unshackling of lobbyists, these will be heard in some quarters as sacrilegious words.
Ms. Palin’s third point was more striking still: in contrast to the sweeping paeans to capitalism and the free market delivered by the Republican presidential candidates whose ranks she has yet to join, she sought to make a distinction between good capitalists and bad ones. The good ones, in her telling, are those small businesses that take risks and sink and swim in the churning market; the bad ones are well-connected megacorporations that live off bailouts, dodge taxes and profit terrifically while creating no jobs.
Strangely, she was saying things that liberals might like, if not for Ms. Palin’s having said them.
'This is not the capitalism of free men and free markets, of innovation and hard work and ethics, of sacrifice and of risk', she said of the crony variety. She added: 'It’s the collusion of big government and big business and big finance to the detriment of all the rest — to the little guys'."﻿
Publié par nestor à l'adresse 12:50 4 Kommentare: 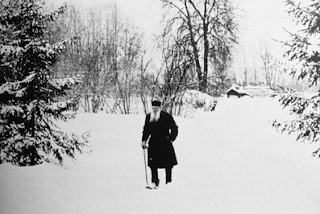 "Okay, okay, I think I've got most of it. Property is theft because the Illuminati land titles are arbitrary and unjust. And so are their banking charters and railroad franchises and all the other monopoly games of capitalism -"
"Of state capitalism. Not of true laissez-faire."
"Wait. Property is impossible because the world is a verb, a burning house as Buddha said. All things are fire. My old pal Heracleitus. So property is theft and property is impossible. How do we get to property is liberty?"
"Without private property there can be no private decisions."
"So we're back where we started from?"
"No, we're one flight higher up on the spiral staircase. Look at it that way. Dialectically, as your Marxist friends say."
"But we are back at private property. After proving it's an impossible fiction."
"The Statist form of private property is an impossible fiction. Just like the Statist form of communal property is an impossible fiction. Think outside the State framework, George. Think of property in freedom."
Robert Shea/Robert Anton Wilson, The Illuminatus! Trilogy, nach der Ausgabe London 1998, S.410-411.
Publié par nestor à l'adresse 12:51 Keine Kommentare:

Die Technology Review des MIT sieht Bitcoin derzeit im Zentrum einer Blase (was wohl auch seiner Entstehungszeitpunkt, inmitten einer globalen Finanzkrise, geschuldet ist), aufgrund der Tatsache dass es kaum als Tausch- und Zahlungsmittel fungiert:
"Setting aside Bitcoin's cool factor - it might just as well have leapt off the pages of Neal ­Stephenson's cult science-fiction novel Snow Crash - a peer-to-peer electronic currency uncontrolled by central bankers or politicians is a perfect object for the anxieties and enthusiasms of those frightened by the threats of inflation and currency debasement, concerned about state power and the surveillance state, and fascinated with the possibilities created by distributed, decentralized systems.
Bitcoin is not going to make government-backed currencies obsolete. But while the system's virtues, such as anonymity and the lack of bank fees, may not matter much to most consumers, one can envision it being useful in a variety of niche markets (some legal, others not, like recreational drugs). Where anonymity is valuable, where trusted third parties are hard to find or charge high rates, and where persistently high inflation is a problem, it's possible that bitcoins could in fact flourish as an alternative currency.

Before they become such an alternative, though, the system will have to overcome a major, and surprising, problem: people have come to see it primarily as a way to make money. In other words, instead of being used as a currency, bitcoins are today mostly seen as (and traded as) an investment. (...) As a result, many - probably most - Bitcoin users are acquiring bitcoins not in order to buy goods and services but to speculate. That's a bad investment decision, and it also hurts Bitcoin's prospects."
Den ganzen Text findet man hier.
Publié par nestor à l'adresse 15:00 Keine Kommentare:

Both kinds of music (68): Cash in den Siebzigern