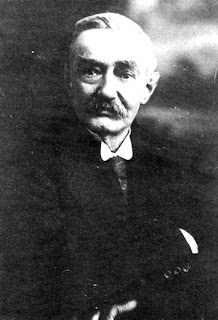 Stray thoughts
by Wm. C. Owen
A time-honored Latin proverb has it that when war breaks out the voice of law grows silent. I am certain that in politics the voice of truth is drowned by clamorous bids for votes, and it does not seem to matter what politics they are. Here is the Socialist party, for example. If Socialism means anything it is that collectivist ownership for use shall take the place of private ownership for profit. There can be no doubt of this, and modern Socialist literature is to a great extent one song of triumph over the extent to which private enterprise is being driven to the wall. Yet here, in California, the party's candidate for governor, touring the State in a much advertised red car, kept assuring the farmer that Socialism, while freeing them from the transportation and money sharks, will leave them in possession of their private farms, to be worked, as now, for private benefit. A desperate effort of my own to set this matter straight almost produced a riot, and never can I find anything but violent contradiction when I tell Socialists they belong to a governmental party. Nevertheless, in a recent number of the Appeal to Reason I find this editorial answer to a question as to what is to be done if the capitalists should decide on a general lock-out: "If they were to close the shops it would be as good a thing as we could ask. Then, under the plea of emergency, we could take possession of the shops and set all the wheels to moving at once under GOVERNMENTAL MANAGEMENT." To fish for votes by repudiating your party's cardinal principle seems to me at once the most despicable and suicidal of policies.
* * *
My own experience with the rank and file of the Socialist party is that intellectually it has not the remotest conception of where it is actually at, but that all its aspirations are toward Anarchism. Invariably private conversation with members brings out the declaration that all they want is equality of opportunity, and that the less government they have the better. But let us not deceive ourselves. That may be the aspiration of the proletarian, sick to death of the authoritarianism he learns from the policeman's club, but it is not the aspiration of the preachers and lawyers who have crowded into the party and are doing- nearly all its talking, because talking is their trade. Almost invariably the preacher's ruling passion is to lay down the law for others to obey; almost invariably the lawyer longs to regulate the lives of others; and such leaders naturally seek to form a centralized society, of which they shall be directors.
* * *
In Los Angeles the Single Taxers are trying to resurrect themselves, and surely, there was never time or place wherein they should be more alive. To boom the natural resources of the country, thereby attracting immigration; to shear such immigration to the skin by continuously raising the admission price to those monopolized resources — this has been the game played unceasingly by the moneyed class since the city passed out of the village stage. Never was it played so relentlessly, however, as at present, for we have entered on an era of frenzied municipal enterprise, anticipating the rush of labor that will come with the completion of the Panama canal. Millions are being spent, south of the city, on harbor improvements, and land speculators gloat daily over the real estate ticker as it records the advanced value of their holdings. North of the city gigantic sums are being invested by the municipality in the development of water, and a group of land cormorants is becoming multi-millionaires.
* * *
Los Angeles is of interest to the great world of social agitation only as she points a moral and exemplifies a principle. It is because she illustrates with unusual clearness how rotten is the sham of public ownership and operation, while land monopoly remains intact, that I give her, and her Single Tax club, publicity. This craze for municipal improvements is the undercurrent of the Socialistic tide, and it is crushing us with bureaucracy and land speculation; digging the gulf between Dives and Lazarus wider and deeper than it was ever dug before. If they could wrench themselves free from what seem to me side issues, the Henry George men might do noble work. As it is, their "cat" has been smothered out of sight and hearing.
Mother Earth. Monthly Magazine Devoted to Social Science and Literature, vol. VI, No. 1, März 1911, S.25-26.
Publié par nestor à l'adresse 08:00